I am the founding owner of Texas City Family Dentistry and League City Family Dentistry. I was born and raised in Texas City and graduated from TCHS in 1989. My road to a dental education passed through a little town called College Station where I attended Texas A&M University GIG’EM. After a well-earned Biomedical Science Degree, I attended one of the top-rated dental schools in the country, UT Health Science Center Dental School in San Antonio. In 1997 I received my Doctor of Dental Surgery degree and headed back to the Bay Area.

The Texas City office opened for patients in August of 1999 and moved to it’s new much larger location in 2016. We opened our second office in League City in 2005 and moved to our own building in 2013 whosed design was inspired by my family’s travels in Italy. Lately I’ve devoted most of my time learning about Sleep Dentistry. It’s a new and exciting world where dental meets medical and our office is one of the few around who can help those patients unable or unwilling to use a CPAP machine for their sleep apnea.

Outside of dentistry, I enjoy working with the community via service organizations – TC/LM Jaycees, Texas City Foundation for the Future and the 9th District Dental Society and spending time with my family. My wife Michele is also a TC native who graduated from TCHS (’88) and Texas A&M (’92). She is a CPA and is the Manager of our Family Dentistry organization. Our oldest Samantha Is currently at Texs A&M Galveston working on her Bachelors in Marine Biology with a Minor in Diving and our boy Tucker is also at TAMUG working on his General Studies.

You will not find me on the golf course – I have enough frustrations during the week!!! I spend my ever-shrinking free time with the kids and or tinkering with new technology integration into dentistry.

Since then, I have completed hundreds of hours of postdoctoral continuing education. I am dedicated to the newest advancements in cosmetic and general dentistry and keep up-to-date with the latest technologies and state of the art dental procedures.

After practicing for a number of years in Dallas, my wife, Stacey and I decided to move back to the Houston area to be closer to family. When I am not practicing my passion of dentistry, I spend most of my time with my two daughters, my son and my wife. In my free time I enjoy all sports and anything involving the water.

I have practiced dentistry for 30 years in Galveston, first as an associate, then opening my Seawall practice in 1996. I was raised in Galveston, class of 1980. I completed my undergraduate education from Stephen F. Austin State University in 1984, then attended Dental School at The University of Texas Health Science Center Dental Branch at Houston. After receiving my Doctor of Dental Surgery degree in 1988, I went home to Galveston to begin my career. I married my wife Kim in 1989 and we have three great kids, Danielle, Kyle and Jacob. All of them are active in sports and school activities. They are a full time job in and of themselves! My spare time is consumed by my two passions: my kids’ activities and my surfing. I’m in the water every chance I get. It’s a great release and a good excuse to go to cool tropical locations for vacation! I came to League City Family Dentistry in October 2008 after hurricane Ike made landfall and I’ve been here part-time ever since.

I was raised in the small town of Freer, Texas. In 1999 I graduated from Texas State College of Harlingen, a branch of the UT Health Science Center San Antonio where I received my degree in Dental Hygiene. Since then, I have worked in General Dental offices and Periodontal offices. I have been working with Dr. Patterson since 2003.

I am a mother of three wonderful boys. My hobbies include working out, spending time with my family, boat rides, and weekend rides on a Harley with friends!

I grew up and graduated from Santa Fe. I worked as a dental assistant after high school for a few years before deciding to pursue a profession in Dental Hygiene. In 2008 I received my Bachelors degree in Dental Hygiene from The University of Texas Health Science Center in Houston. I have enjoyed working in the Texas City and League City offices since September of 2008. I am married with two beautiful twin girls. When my husband and I are not at dance or soccer practice we enjoy playing golf, not well, and catching a Rockets game with the kids.

I grew up in Texas City and graduated from Texas City High School in 2003. I played volleyball from middle school through to High School Varsity while also playing Club Ball during the off season. I received my Bachelors Degree from Texas State University with a major in Biology and a minor in Chemistry. I graduated from dental hygiene school at Blinn, got my license shortly after and began working with Dr. Patterson, in both the Texas City and League City offices. I recently purchased my first home in League City and got married to the love of my life in November 2015. I have an adorable Chihuahua named Roxy and in my free time, I love to visit New Braunfels.

I was born in Texas City and met my husband back in 2008 when I moved to Illinois. We moved back to my home state in 2012. I love spending time with my family, reading and enjoy cuddles with my dog, Lily. I also hate the cold and cannot wait to bring summer back to enjoy outside activities. 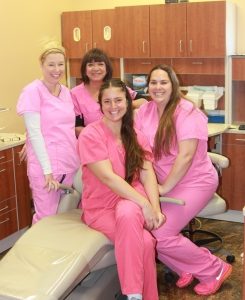 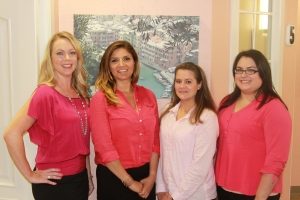 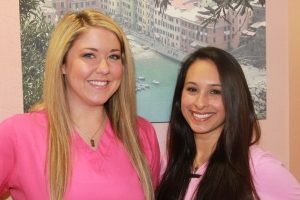 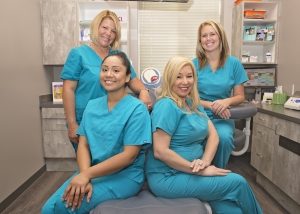 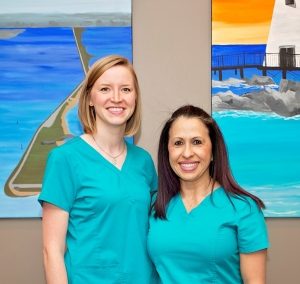 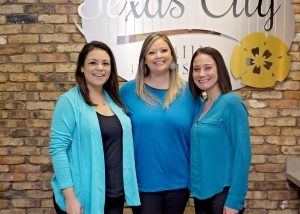